Dirty energy companies want people to believe that nuclear power is necessary to reduce greenhouse gases and avert the climate crisis. This could not be further from the truth. Nuclear power is not a climate solution: it is too dirty, too dangerous, too expensive and too slow. At every stage of production, it is rooted in environmental injustice and human rights violations. The uranium fuel chain and nuclear disasters make the dangers of climate change worse, and the nuclear industry actively blocks renewable energy and other solutions to end fossil fuels. Uranium and fossil fuels must be left in the ground. We can and must phase out nuclear power along with fossil fuels, to repair environmental injustices and protect generations to come.

Too Dirty – The Nuclear Fuel Chain

Nuclear reactors make electricity by boiling water, just like coal, gas, and biomass plants do. But instead of using combustion that consumes fuel by burning it, nuclear reactors release subatomic energy by splitting uranium atoms in a chain reaction (nuclear fission). This generates immense amounts of heat, enough to melt the fuel (a meltdown), damage the reactor and release large amounts of radiation. It is the most complicated and dangerous way to boil water ever invented.

The fuel for nuclear power relies on a long chain of extraction, processing, enrichment, and generation of vast amounts of radioactive and toxic wastes. It contaminates air, land, and water, expanding the danger to ecosystems and essential sources of life and well-being. The nuclear fuel chain affects countries all over the world from Namibia to Russia, from Japan to Brazil, from Australia to Canada. It could soon expand to Indigenous lands in Greenland, where the industry is attempting to begin uranium mining.

The fuel chain starts with mining and milling uranium, then enriching it to increase the concentration of uranium-235 (the main isotope for fission). Mining and milling produce immense amounts of radioactive waste. Before a single pound of fuel goes into a reactor, it has produced more than 3,500 times as much long-lived radioactive waste dumped at mines and mills in the open air, either in piles or ponds.[1] Uranium is also extracted through a chemical process, in-situ leach mining (ISL). ISL produces less solid waste, but directly and irreversibly pollutes groundwater.

In the U.S., there are over 15,000 abandoned uranium mines predominantly on Indigenous lands west of the Mississippi River.[2] These sites contaminate air, land, and drinking water, causing cancer epidemics and other diseases among Indigenous Peoples. Uranium enrichment and fuel fabrication plants in New Mexico, North Carolina, Ohio, Oklahoma, South Carolina, and other locations are located predominantly in Black, Indigenous and People of Color (BIPOC) communities, and have a long track record of leaks and spills. As long as we rely on nuclear power nuclear disasters such as Chernobyl and Fukushima will continue to occur. Yet, the likelihood of reactor meltdowns is increasing, due to rising sea levels, the increase in severe storms and extreme weather events, and warming water temperatures. In addition, reactors around the world are becoming more dangerous due to their age and the degradation of major components and structures. Two-thirds of reactors world-wide are over 30 years old; 20% are over 40 years old – longer than they were designed to operate.[3]

Fukushima Dai-Ichi disaster has left one of Japan’s prime agricultural and fishing regions contaminated, and tens of thousands of people can never return to their homes. The “cleanup” of the reactor site is expected to take up to 60 years and cost up to US$750 billion.[4], [5], [6]

The largest radioactive disaster in North America occurred in 1979 on the Navajo Nation. A mill tailings dam in Church Rock, New Mexico, burst, dumping over 90 million gallons of uranium tailings, flooding nearby pastures and flowing more than 80 miles down the Puerco River.[7] The radioactive and toxic waste was never cleaned up. Affected communities, including Red Water Pond Road, have suffered contamination and dislocation, despite decades of fighting for cleanup and reparations.

Too Expensive, Too Slow

Nuclear power has proved itself to be too slow and expensive for solving climate change. Building nuclear power plants almost universally runs way over budget, and takes at least 10-15 years, on average – if and when they are actually completed.[8] Over half of all reactors ever proposed in the U.S. were canceled, and the failure rate is much higher in the last decade.[9]

Utilities in nearly every country ran into billions of dollars of cost overruns and bad debts when building reactors in the 1980s. This led to a virtual halt to construction of new reactors in the 1990s.[10] In order to remain relevant in relation to the climate crisis, the industry declared a “Nuclear Renaissance” in 2005, with a new generation of reactor designs that were supposed to be safer, faster, and more affordable to build. Instead, by 2018, skyrocketing costs and delays led most projects outside of China to be canceled. Some of the largest nuclear corporations in the world went bankrupt, including Westinghouse and Areva. The only two reactors being built in the U.S. (Vogtle 3 and 4 in Georgia) are now US$14 billion over budget, and over five years behind schedule.[11] If Georgia utilities had invested in efficiency and renewables instead, their customers would have lower utility bills and the state would have reduced fossil fuels far more than the Vogtle reactors could ever do.[12] 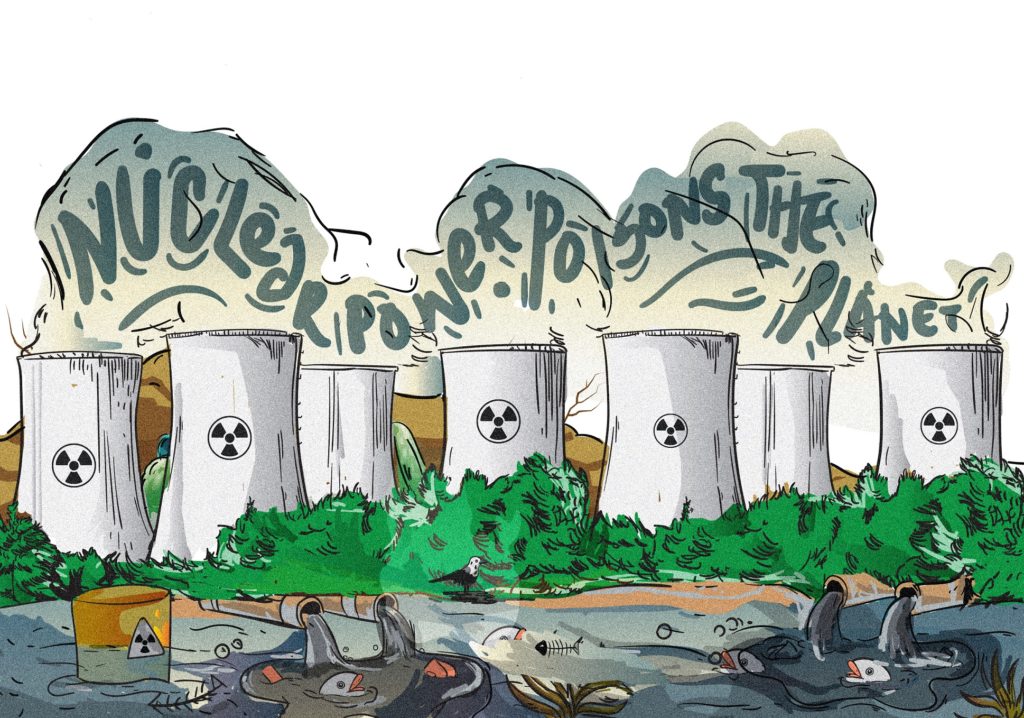 Radioactive waste is, itself, another global environmental crisis, endangering water and health. The 80,000 tons of irradiated fuel at reactors in the U.S. contains enough radioactivity to make every drop of drinking water on Earth too dangerous to consume.[85] That is only 25% of the world’s total and does not include the immense volumes of uranium waste rock and mill tailings, depleted uranium, and “low-level” radioactive waste.[86] There is still no “solution” for the waste, which will remain hazardous for over one million years.[87] This is an unjust burden on future generations, a danger to ecology and health we have no right to impose.

In addition, reactors release radioactive wastes into air and water, as part of their normal operation. These routine releases, along with leaks and spills, contaminate surrounding communities, most of which are low-wealth and rural, resulting in untold epidemics of cancer, congenital defects, and other diseases.

Although reactors do not release very much carbon dioxide in generating electricity, nuclear power produces significant greenhouse gases – several times more than wind and solar. Mining, milling, and enriching uranium are very energy-intensive, resulting in significant greenhouse gas emissions. The construction of reactors entails a huge carbon debt, due to the concrete and steel used for construction. A half-built nuclear power project in South Carolina was canceled in 2017 when its cost doubled to US$25 billion. The project had already generated as much concrete and steel as building a professional football stadium.[88] Even after a reactor closes, the decommissioning, transportation and storage of huge volumes of radioactive waste will generate greenhouse gases for at least 10-20 years.[89] 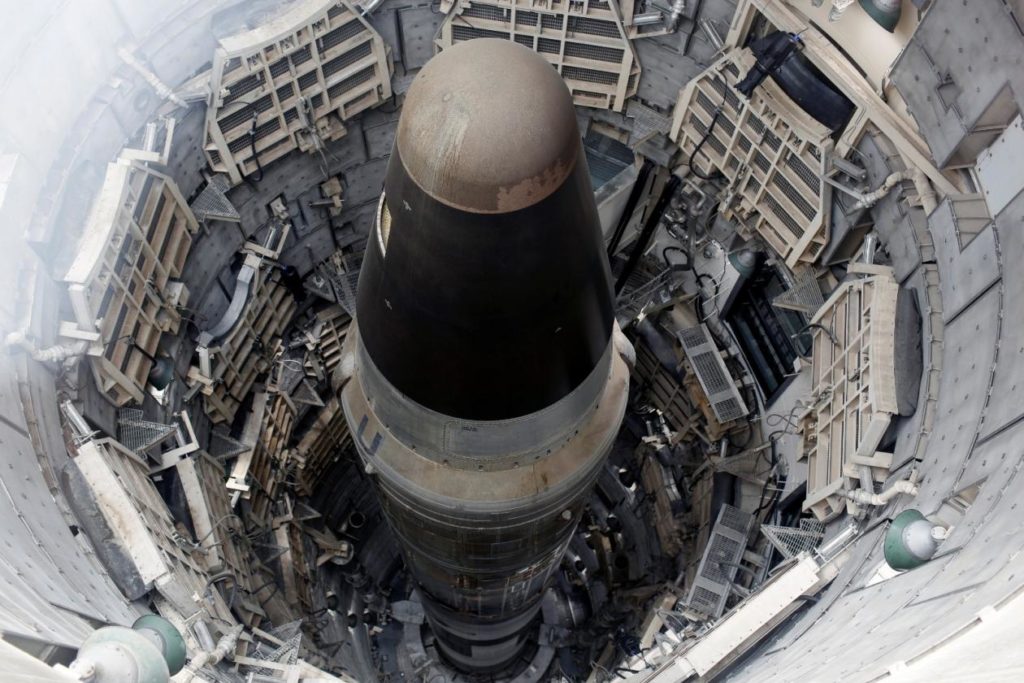 As long as we have nuclear power, we will face the danger of nuclear warfare. Uranium enrichment for nuclear power uses the same technologies required to make warheads for nuclear weapons, and it generates 7-8 times as much depleted uranium (lower in U-235) as the enriched uranium for fuel.[90] In addition, the U.S. military has weaponized depleted uranium (DU) – using it to produce bullets for fighter planes, tank shells, and tank armor. The use of DU has contaminated land, air, and water in Puerto Rico, Iraq, Afghanistan, and other regions where the U.S. has engaged in military campaigns and munitions testing. Because uranium is also a heavy metal, it leads to multiple, severe, long-term health effects when it is breathed in or swallowed.