Promoted by corporate backers as the “least dirty” of the fossil fuels, natural gas (methane) is still touted as a “bridge fuel” by claiming it can be a clean “alternative” to coal and petroleum. However, evidence of methane leaks all along the supply chain, from well to burning, demonstrates how natural gas is contributing to climate change. Furthermore, even if gas leakage was not a reality, natural gas is no longer cheaper than wind and solar on the other side of the bridge.[1] As the industry continues under pressure from environmental justice groups, expanding and diversifying of natural gas false solutions intensifies. 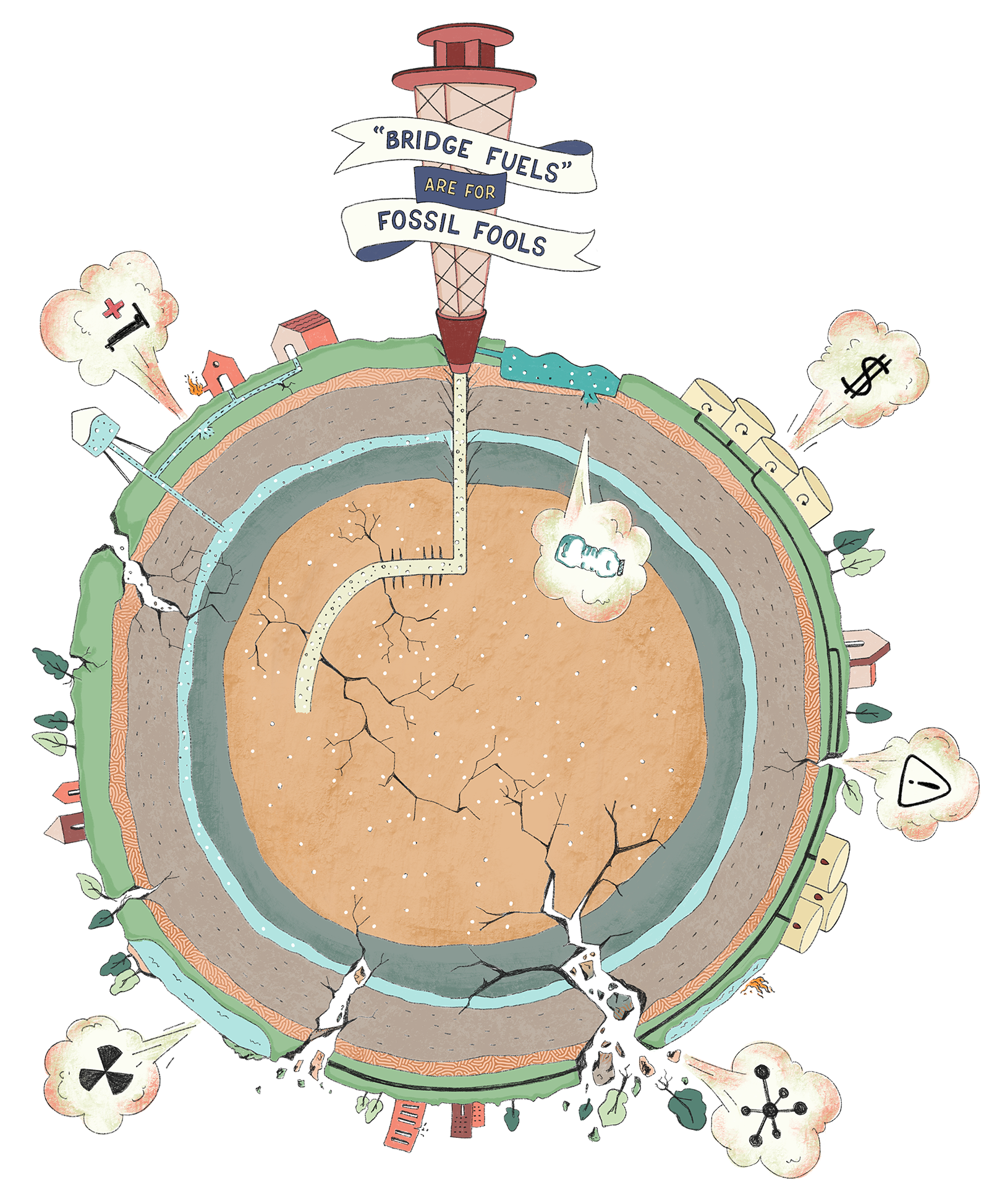 Natural gas is full of contradictions beyond its name. The industry uses an extreme extraction technique known as hydraulic fracturing, or “fracking,” where a toxic mix of water, sand and chemicals is injected underground at high pressures to release gas and oil trapped in geologic formations. At the same time, where crude oil is extracted using fracking technology, like the Bakken basin in North Dakota impacting the lives and livelihoods of Indigenous Peoples, unwanted natural gas is disposed of through flaring.[2] Community impacts from drilling and fracking include: health impacts from living near wells and compressor stations; contaminated water, air and soil; induced earthquakes; clogged and damaged roads; missing and murdered Indigenous women from the appearance of temporary communities of mostly male workers, known as “man camps”; and other impacts of a boom and bust economy.

Exporting natural gas requires pipeline and port infrastructure. Pipelines can leak, catch fire or explode. Further, companies are often granted eminent domain rights to seize land and place pipelines through Indigenous Territories, backyards, farms, sacred sites and near schools, over the objections of communities. Before shipping, the gas must be compressed into a volatile liquefied natural gas (LNG) in dangerous port facilities. LNG is compressed, super-cooled methane that can be shipped overseas in giant tankers. Overseas transport of natural gas can account for up to 21% of its greenhouse gas emissions.[3]

Another growing threat to climate and community health comes from selling the “wet” component (natural gas is mostly methane but includes substances referred to as wet gas) of fracked gas to petrochemical plants for making disposable plastics. In addition to massive greenhouse gas emissions loads,[4] petrochemical facilities that produce plastics (i.e. ethane cracker plants) produce massive amounts of hazardous air pollutants, particulate matter, benzene, toluene and other toxins. This is on top of all the health and environmental impacts of the drilling, fracking, transportation and waste disposal associated with plastics production. 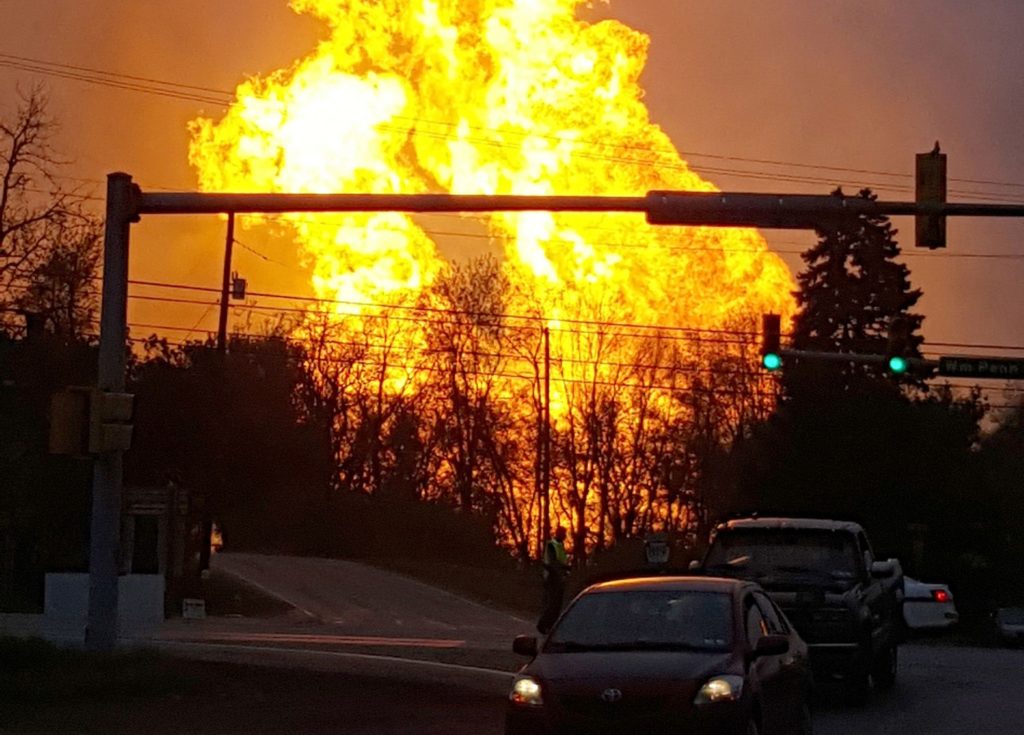 Natural gas: coming to a suburb near you 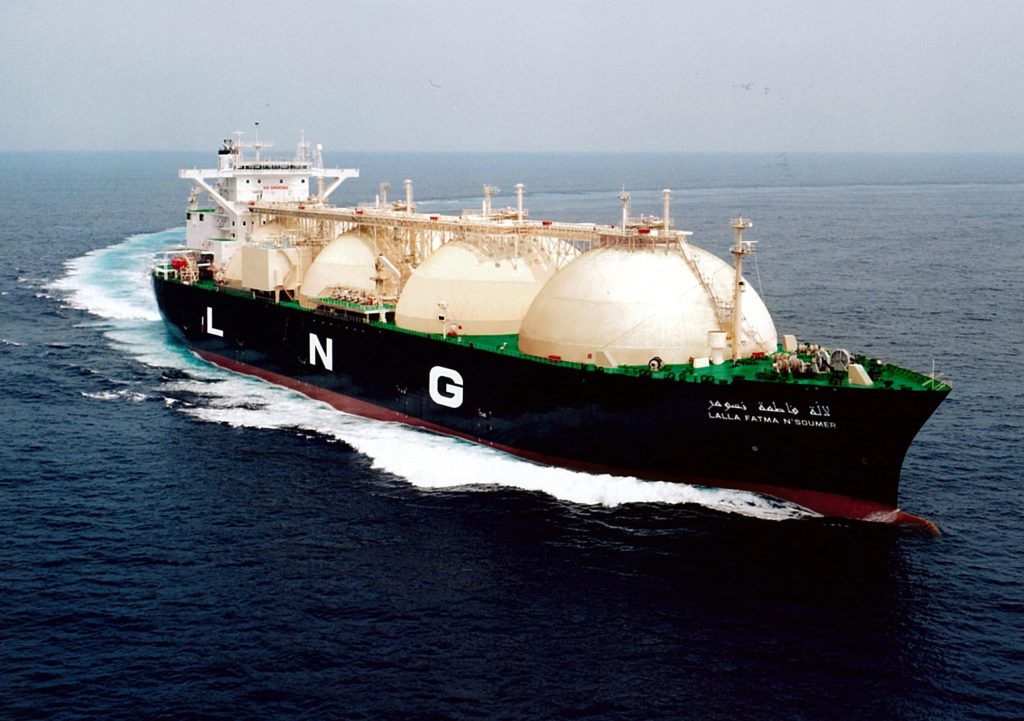 Most plastics are made to be disposable, permeating every aspect of our lives and causing centuries of harm. Microplastics are found in most tap water supplies, across all our oceans, in our food and in our bodies. Recent studies have shown we eat and drink enough plastic to make a credit card from what we ingest each week![5] In addition to the hydrocarbons used to formulate the resin, plastics contain various heavy metals and phthalates that are known carcinogens and endocrine disruptors. Plastic pollution also poses a serious threat to ocean ecosystems, with giant swirling masses of plastic in each of the world’s oceans, such as the Great Pacific Garbage Patch.[6] While plastics represent less than 8% of the world’s oil use,[7] and despite growing public rejection of single-use plastics, big oil is looking to plastics as the biggest source of new demand in coming years, investing billions to secure its growth.

A new form of greenwashing for the oil and gas industries is hydrogen, which is much hyped as a clean energy source (see Hydrogen).

However, creating hydrogen in a pure form on Earth requires as much energy as it uses. It is a sort of bait-and-switch, in which promoters talk about: “green hydrogen” produced via “renewable energy,” “grey hydrogen” derived from burning fossil fuels,” and “blue hydrogen” where the carbon dioxide (CO2) emissions from production are captured and stored (see Hydrogen and Carbon Capture). Yet hydrogen is most commonly produced from natural gas, giving the industry another excuse to continue drilling and profiting.[8]

Ultimately, when examining causes of climate change, methane emissions are highly impactful. In comparison to CO2, methane is about 86 times more potent in immediate effect but clears out of the atmosphere in around twelve years, whereas some of the CO2 emitted today will still be causing climate change centuries from now.[9] However, right now is when we face critical tipping points. We cannot afford more methane emissions now, or the environmental and climate justice impacts they continue to produce from extraction to shipping to plastics.