The transport sector – private automobiles, air travel and global trade and transport of goods and materials – is a major source of demand for fossil fuels and of greenhouse gas (GHG) emissions, among other problems. But rather than contemplate serious measures to curtail demand for fuel, the false solution of biofuels is touted by a conglomerate of interests, including auto manufacturers, fossil fuel companies, the biotech industry, industrial agriculture and some career academics. They proclaim that biofuels are clean, green and climate friendly, and will enable countries to be “energy independent” – freed from domination by oil-rich countries. The biofuel mythology has won strong support, generous subsidies and legislative mandates, such as the Renewable Fuel Standard in the U.S. and similar laws in other countries.

Corn and sugarcane ethanol, soya and palm oil biodiesel, and a host of other biofuels have since come into widespread use, creating a direct and disastrous link between markets for commodity food crops and markets for fuel. Because of the extremely large land area required to grow crops for biofuel, as well as their demand for fertilizers, biofuel crop production competes with food production, even as demand for food is rising with global affluence. The new profitable market for fuel crops is a major factor in land grabbing – the displacement of communities and Indigenous Peoples from their lands – by speculative investors seeking to profit from biofuel crop ventures.

We have heard for many years now that the problems with “first generation” biofuels would be eliminated by a new “second generation” of cellulosic and advanced biofuels, made from non-food crops (agricultural residues, wood, algae, etc.). But those new improved biofuels have never been successfully produced in any significant quantity, in spite of numerous, much-hyped and costly attempts. Technical hurdles with turning woody material (cellulose) into fuel at commercial scales are likely insurmountable, but still a taxpayer-funded money pipeline continues to flow into research and development.

In attempts to overcome some of the technical hurdles, the biotechnology industry has taken a central role, developing genetically engineered (GE) crops such as corn varieties better suited for ethanol fermentation, trees with altered wood (cellulose) characteristics, and microbes to produce enzymes for some fuel production technologies. One contingent has long claimed that algae biofuels will solve the problem, and provide copious quantities of clean, green, climate friendly fuel from non-food feedstock. Researchers are hard at work genetically engineering microalgae for fuel production, introducing the risks of GE algae contamination. Even after decades of trying, algae biofuels remain forever “on the horizon” with a parade of much-hyped “breakthroughs” that only serve to prolong the hopes that some magical biofuel solution will allow us to continue to drive and fly and trade around the globe unabated. Meanwhile, real solutions to our overuse of transportation remain largely sidelined and untapped.

The aviation industry has developed the Carbon Offset Reduction Scheme for International Aviation (CORSIA). The underlying goal is to enable the ongoing exponential growth in the aviation industry, while claiming to reduce GHG emissions. The main pathway for “decarbonization” that CORSIA is pursuing includes forest offsets and alternative fuels (see Carbon Pricing). The industry is well aware that the only viable aviation biofuel available on such a massive scale would entail the use of palm oil – a leading driver of deforestation.

The biofuel industries have now linked up with the gas industry, touting the use of biodigesters to produce methane as “renewable natural gas” (see Nature-based Solutions). Similarly, ethanol producers are linking up with carbon capture interests, since fermentation produces carbon dioxide (CO2). While claiming to reduce emissions by capturing the CO2, in reality it is largely sold for use in enhanced oil recovery (see Carbon Capture).

The false solution of biofuels as an alternative to fossil fuels is nowhere more problematic than in the “renewable energy” trend of burning so-called “biomass.” The term has included everything from trash to trees, construction and demolition wood waste, black liquor (toxic paper mill goo), grasses, crop wastes, poultry waste and more – but usually involves burning trees in power plants or burning lumber, and paper mill and sawmill wastes to heat these mills. All of these types of “biomass” create pollution while burning and can rival or exceed the pollution from coal burning. Coal plants under pressure to reduce emissions are subsidized grandly for burning wood chips and pellets instead, and new standalone biomass power stations are popping up around the world. Burning wood is almost universally considered to be clean, green and “carbon neutral” or “low carbon” in spite of the deforestation, and hence carbon emissions, that are resulting from this huge new demand for wood. Smokestack emissions from burning biomass are higher even than coal burning, per unit of energy, but this CO2 is ignored.[1] 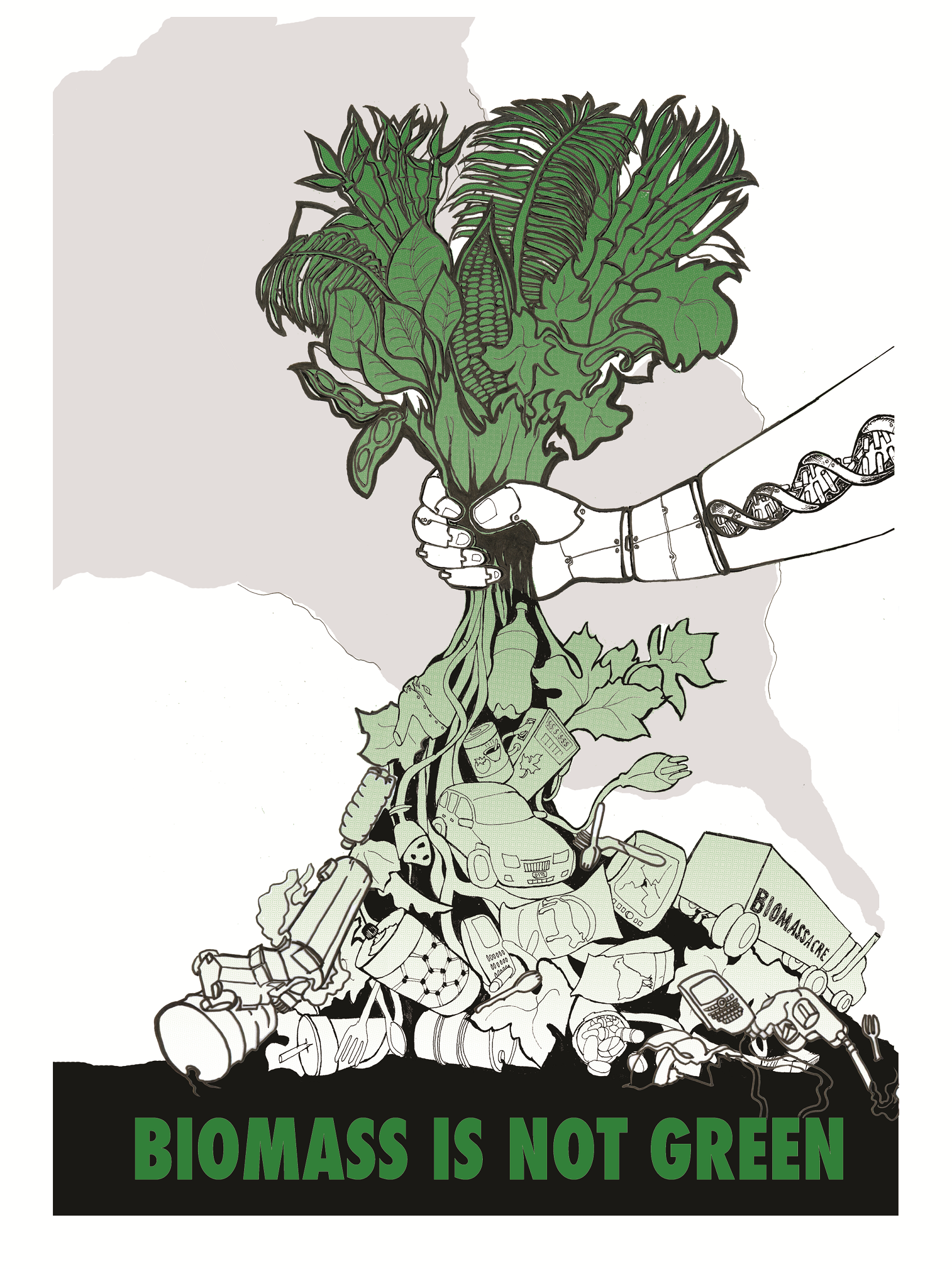 Brought to you by the Environmental Non-Profit Industrial Complex™

They are ignored due to an accounting error in United Nations Framework Convention on Climate Change (UNFCCC) guidelines that failed to count the smokestack emissions from bioenergy production in either the energy sector or land use sector. That was further reinforced by arguments that CO2 released when trees are burned would be offset by CO2 stored in newly grown trees. Yet, there is no guarantee that new trees will grow, and if they do, they may take decades – time we cannot afford.

A fast-expanding global trade in wood chips and pellets has nonetheless emerged over the past decade. Forests, including rare old growth forests in parts of the U.S., Europe and Canada are targeted for pellet production. In the U.K., the largest power plant, DRAX, has converted some of its energy generation from coal to wood pellets which are imported largely from forests in Canada and the southeastern U.S. Pellet manufacturing plants (dirty and noisy) have been established throughout the region – often in low-income communities. Meanwhile, the International Energy Agency advocates for greatly expanding this absurd false solution, and continues to advocate, along with policymakers around the world, for biomass as clean renewable energy, worthy of subsidies alongside wind and solar.

The biofuels industry and the forest products industries claim to resolve the potential problems through the adoption of “sustainability standards.” Those standards, even when they sound good on paper, universally fail to protect, especially because certification itself has become a profit-driven industry lacking independent verification of compliance. Ultimately, simple common sense applies: when the scale of demand itself is too great to be met sustainably, then no sustainability standard can make it sustainable.

As if demands on forests and land were not already far from sustainable levels, recent promotion of bioenergy with carbon capture and storage (BECCS) outrageously claims that burning trees for power and then capturing the carbon emissions and somehow sequestering them away would actually remove CO2 already released into the atmosphere. The faulty logic starts by incorrectly assuming burning trees for energy is in fact carbon neutral. Then, proceeds to presume that we can safely and efficiently capture the CO2 emissions from combustion and bury them somewhere (see Carbon Capture). Finally, the logic states that carbon absorbed by new tree growth (which cannot be assumed and will not be timely) would not just offset the combustion emissions but remove additional carbon from the atmosphere – i.e. carbon negative. This entirely fanciful logic fails on every count. And, if we were to go along with that false logic, the amount of land required to implement BECCS on a large scale would be astronomical – entirely beyond planetary boundaries. But none of that is likely to transpire because in the real world, there is no BECCS. A few pilot projects have been attempted but capturing CO2 from burning biomass is even more challenging than from coal plants (so called “clean coal” which has a history of failure). The real danger of BECCS is that it is conveyed as a real-world potential way to remove CO2 from the atmosphere. That false hope undermines efforts, funding and capacity that is urgently needed for implementing real solutions. 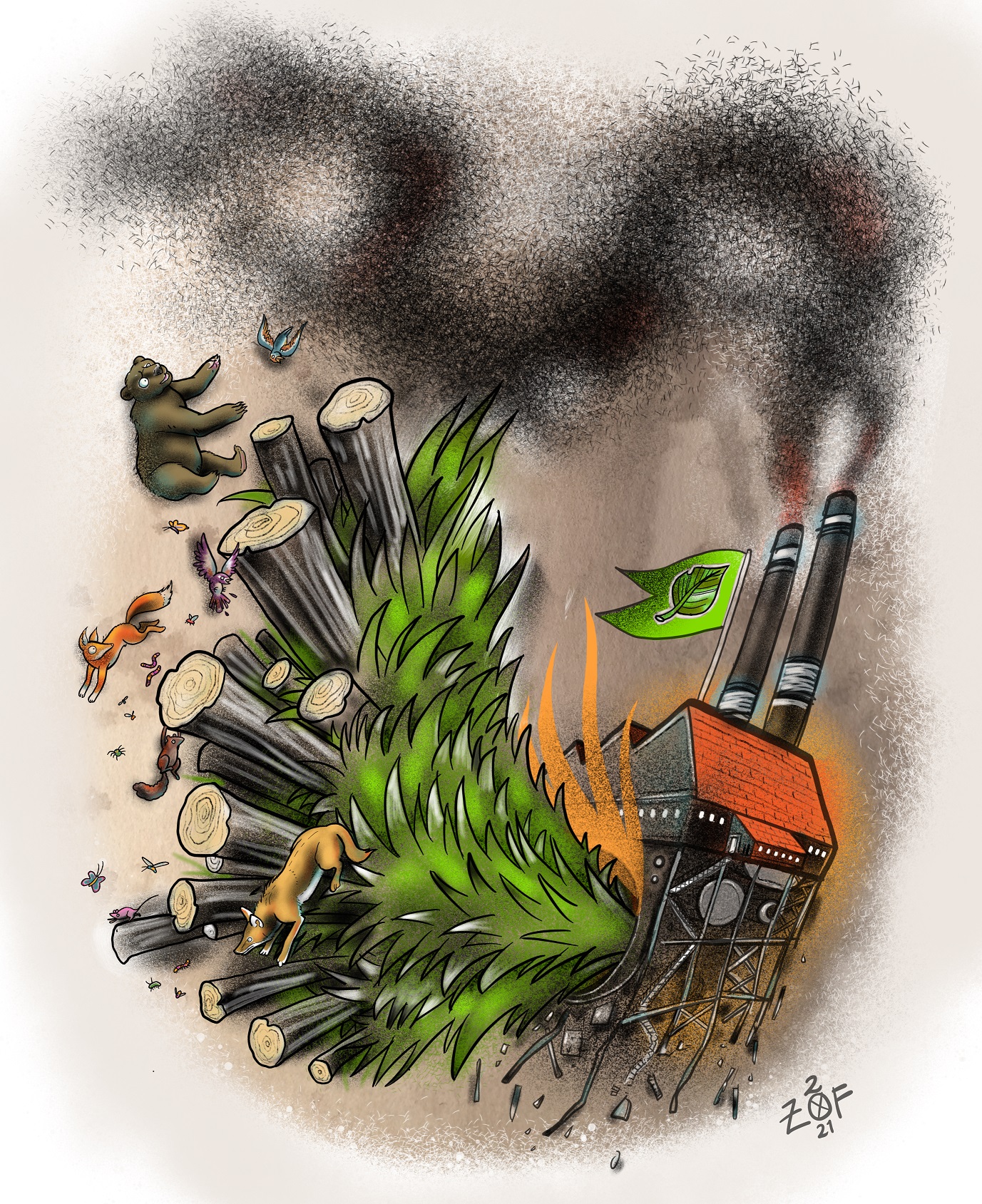 Creating this massive new demand for wood while at the same time advocating for forests as offsets, and tree planting as a solution, makes no sense. We cannot have our forests and burn them too! No amount of tree planting can undo the harms from logging old growth forests! While trees may technically be renewable, complex forest ecosystems are not. Industry interests are weaving a web of deceit, claiming for example, that young trees are better for climate because they absorb more carbon, when in fact old trees already hold carbon and continue to absorb more carbon. Industry favors young trees because they seek to create more tree plantations – industrial monocultures often of non-native species, treated with chemicals and fertilizers for the purpose of rapid and mechanically efficient short-rotation production of wood.

Claiming that tree plantations are good for the climate, they advocate increasing demand for wood and GHG accounting tricks that would represent the use of more wood – and more land conversion and deforestation – as lowering emissions. Those who profit from expanding markets for wood advocate its use for energy, in construction, as carbon storage in so-called “harvested wood products,” as an alternative to concrete, and as carbon sinks – even when plantation trees will be cut down in as little as five-year growth cycles. Tree plantations are more akin to corn fields than to forests. When it comes to forests, one hand advocates forest protection, forest offsets, reducing emissions from deforestation and forest degradation (REDD+), and tree planting, while the other advocates logging, burning, pelletizing, industrial monoculture plantations, and GE trees.[2] What is held in common is a drive towards false solutions.